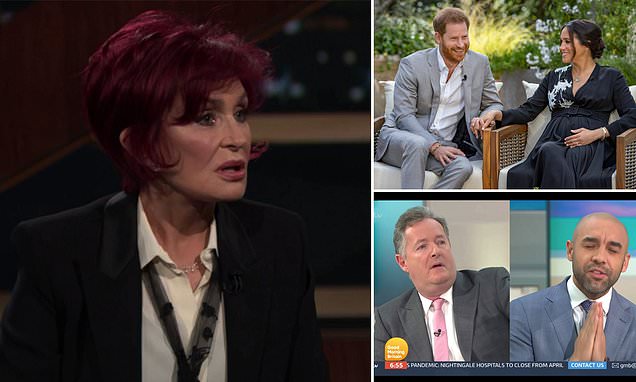 Sharon Osbourne sat down for her first interview following her forced exit from The Talk after defending Piers Morgan over his Meghan Markle comments and called Prince Harry the ‘poster boy’ of ‘white privilege.’

The furious talk show star appeared on Real Time with Bill Maher on Friday where she hit out at claims she was ‘racist’ and slammed ‘woke culture’ for cancelling anyone who couldn’t keep up with changing ‘acceptable’ language.

‘I’m angry. I’m hurt,’ Osbourne said when asked about the scandal that saw her leave her show on March 26, after 11 years.

‘I’ve been called so many things in my life. I am so used to be called names. But a racist is one I will not take,’ she said.

The scandal began in the wake of Prince Harry and Meghan’s explosive interview with Oprah, where they both claimed Meghan experienced racism as a royal and even felt suicidal.

Morgan had said after the interview: ‘I’m sorry, I don’t believe a word she said, Meghan Markle. I wouldn’t believe it if she read me a weather report.’

DailyMail.com’s editor-at-large left his role as host of ITV’s Good Morning Britain on March 9,  after refusing to back down on his comments.

Osbourne, 68, leapt to Morgan’s defense on The Talk the next day, saying she supports her friend ‘for his freedom of speech’. The comment lead to a tense exchange with co-host Sheryl Underwood and eventually lead to the ousting of Osbourne and a flurry of claims from her former colleagues about alleged racism.

During the interview, Maher confronted Osbourne about accusations that she used derogatory language about some former The Talk co-hosts.

‘We don’t condone any bad language anywhere but I’m just saying, first of all, we’re talking about four ladies,’ said Maher. ‘I know that men are dogs.’

Osbourne, 68, appeared on Real Time with Bill Maher on Friday where she repeatedly told the host that she is ‘fine’ and a fighter’

Osbourne said those kinds of offensive slurs were ‘not in my vocabulary.’ 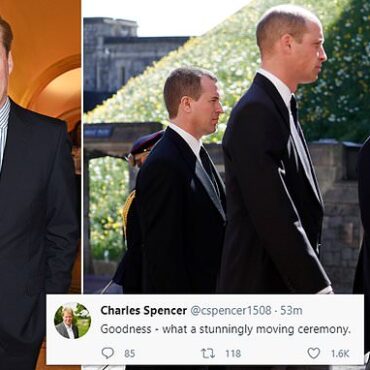 Charles Spencer praised the Duke of Edinburgh's 'stunningly moving' funeral today. The brother of the late Princess Diana, 56, took to Twitter on Saturday after Prince Philip's funeral on Saturday afternoon to describe the ceremony as 'moving'. Charles was not in attendance at Saturday's funeral, which only saw a scaled-back 30 guests in attendance due to the ongoing Covid-19 pandemic. After the funeral, which was broadcast live on UK television […]