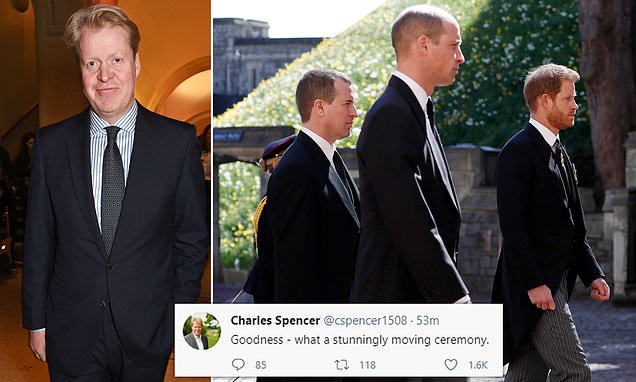 Charles was not in attendance at Saturday’s funeral, which only saw a scaled-back 30 guests in attendance due to the ongoing Covid-19 pandemic.

After the funeral, which was broadcast live on UK television channels including the BBC, Charles simply tweeted: ‘Goodness – what a stunningly moving ceremony.’

Earl Spencer’s simple tribute came after the royal family gathered at St George’s Chapel on Saturday afternoon to pay respect to the late Duke of Edinburgh.

The Queen’s four children, eight grandchildren and their respective spouses came together to support Her Majesty following the death of her husband last week at the age of 99.

All 30 guests who attended the intimate funeral amid the Covid-19 pandemic kept themselves protected by wearing black face masks covering both their noses and mouths.

The funeral saw Charles’ nephews Prince Harry and Prince William reunite for the first time since Harry’s interview with Oprah, although they were separated by cousin Peter Phillips during the royal procession behind Prince Philip’s coffin.

Charles was not in attendance at Saturday’s funeral, which only saw a scaled-back 30 guests in attendance due to the ongoing Covid-19 pandemic, but tweeted after the ceremony (above)

It comes after a royal expert claimed that walking behind their grandfather’s coffin would bring back ‘difficult memories’ for Prince William and Harry of ‘losing their mother’.

Following Princess Diana’s death, William and Harry walked behind her coffin alongside Earl Spencer, Prince Charles, Prince Philip as it made its way to Westminster Abbey.

Charles married Canadian-born Karen Villeneuve at the Spencer’s Northamptonshire estate in 2011 after separating from second wife Caroline Freud in 2007. He was married to first wife Victoria Lockwood from 1989 to 1997.

Charles, the only surviving son of France Shand Kidd and John Spencer is custodian of Althorp.

Diana had an older brother, John Spencer, died within ten hours of his birth on 12 January 1960.

Charles has been married three times, firstly to Victoria Lockwood, with whom he has Lady Kitty Spencer, 30,  twins Lady Eliza Spencer and Lady Amelia Spencer, 28 and Louis Spencer, Viscount Althorp, 26.

He also has Edmund Spencer, 17, and Lady Lara Spencer, 15, from second wife Caroline Freud, who was previously married to PR guru Matthew Freud.

With his current wife Karen, he has one daughter, Charlotte Diana Spencer, eight. 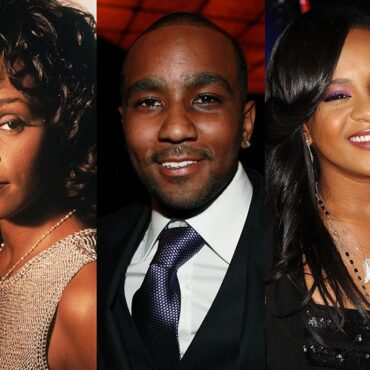 Bobby Brown isn't closing the book on the drug overdose deaths of wife Whitney Houston and daughter Bobbi Kristina Brown -- in fact, he says he's found the real killer. Bobby says he blames Nick Gordon, Bobbi Kristina's longtime boyfriend, for both deaths. In an appearance on Jada Pinkett Smith's Red Table Talk, he explains, “He was the only one there with both situations with my ex-wife and my daughter, and they both died the same way.” Both Whitney and Bobbi […]