The votes have been counted and the following have been elected for induction into the Rock and Roll Hall of Fame:

Performer Category – honoring bands and solo artists who, in their careers, have created music whose originality, impact and influence has changed the course of rock ‘n’ roll:

Musical Excellence Award — given to artists, musicians, songwriters and producers whose originality and influence creating music have had a dramatic impact on music:

Early Influence Award — given to a performing artist or group whose music and performance style have directly influenced and helped inspire and evolve rock ‘n’ roll and music that has impacted youth culture:

Ahmet Ertegun Award – given to non performing industry professionals who, through their dedicated belief and support of artists and their music have had a major influence on the creative development and growth of rock ‘n’ roll and music that has impacted youth culture:

To be eligible, artists are required to have released their first record 25 years prior to induction.

Ballots were sent to an international voting body of more than 1,000 artists, including current living Inductees, historians and members of the music industry.

Three out of the Top 5 on the Fans’ Ballot are being Inducted — Tina Turner, who won the Fan Vote,  The Go-Go’s and Foo Fighters. The Top 5 as selected by the public comprised a Fans Ballot that was tallied along with the other voting body ballots.

The Foo Fighters, The Go-Go’s and Jay-Z were on the ballot for the first time. Jay-Z finished last in the Fan Vote.

Dave Grohl was previously Inducted with Nirvana in 2014.

A portion of Dave Grohl’s acceptance speech when Nirvana was inducted into the Rock and Roll Hall of Fame in 2014. OC:…and also be in Nirvana. :19

“I was the quiet one in Nirvana. I was the drummer. But most of you don’t know that I was the fifth drummer of Nirvana. For whatever reason I got to be the luckiest person in the world and also be in Nirvana.”

Carole King went in with her ex-husband and songwriting partner Gerry Goffin in 1990 in the non-performer category. She has been eligible as a performer since 1986.

Tina Turner was inducted with Ike and Tina Turner in 1991. She’s been eligible as a solo performer since 2000, and finished number-one in the Fan Vote.

Commenting on his induction, Todd Rundgren, who’s been eligible since 1996, has made it clear he wants nothing to do with the Hall, tells us, “I’m happy for my fans. They’ve wanted this for a long time.”

Todd Rundgren on is he is elected for induction into the Rock and Roll Hall of Fame. OC:…my fans to collect it. [Laughs] :10 [Phone Quality]

“I wouldn’t care anymore about it, but I would have to acknowledge my fans. But I don’t think I would actually go to the ceremony. In fact I might even send some of my fans to collect it.”

The Go-Go’s, who first became eligible in 2006, issued a statement saying, “We are overwhelmed with gratitude to be 2021 inductees into the Rock and Roll Hall of Fame. Women have always been a vital part of the ever-changing music business and The Go-Go’s are so proud to have our success story honored and recognized by fans and voters.”

And Ozzy Osbourne on his late guitarist Randy Rhoads being given the Musical Excellence Award tells us, “I’m so happy that Randy’s genius, which we all saw from the beginning, is finally being recognized and that he is getting his due. I only wish he was here in person to get this award and that we could all celebrate together. It’s really great that Randy’s family, friends and fans get to see him honored this way.” Randy was killed in a plane crash while on tour with Ozzy in 1982.

Two honorees worth noting are LL Cool J and Kraftwerk.

Each have been nominated six times, so, to ensure they are enshrined, they’ve been honored outside the Performer Category with LL getting the Musical Excellence Award, and Kraftwerk the Early Influence Award.

Those who failed to make the cut this year are:

Tickets go on sale in July at Ticketmaster.com.

Select Rock Hall donors and members get exclusive ticket opportunities if they donate or join by June 30th. Go to RockHall.com/join for details. 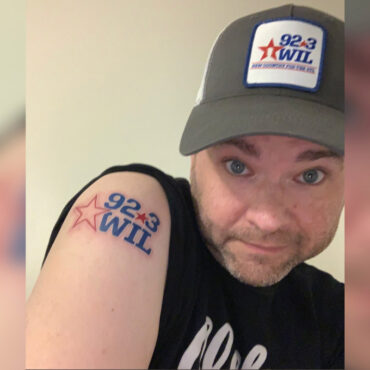 A St. Louis DJ learned the hard way that tattoos are forever, but jobs aren’t.  Less than a week after getting the station’s logo tattooed on his arm, WIL (92.3 FM) Country-music jock Mason Schreader got a tattoo of his station WIL on his arm last month and less than a week later, was laid off. Schreader, half of the morning-drive “Mason & Remy Show” with Zachary Hoesly, took to Twitter to announce […]