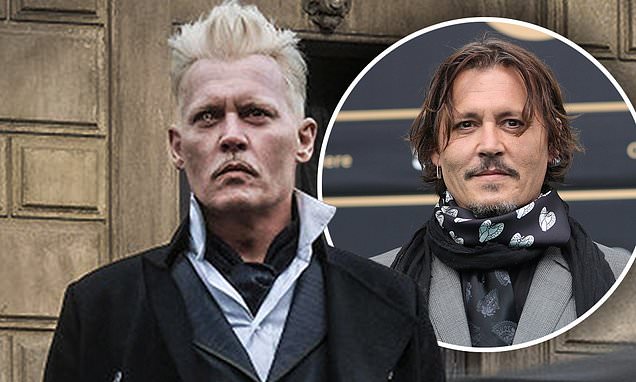 Johnny Depp will take home at least $10 million for filming one scene on Fantastic Beasts 3, after Warner Bros. cut ties with the embattled actor after a libel suit he filed in the U.K. was dismissed.

Warner Bros. must pay the 57-year-old after his full pay for the film, which he shot one scene for since production kicked off September 20 in London, according to The Hollywood Reporter.

The studio told the crew last week that Depp would no longer play Gellert Grindelwald in the J.K. Rowling series.

The latest: Johnny Depp, 57, will take home at least $10 million for one day of filming on Fantastic Beasts 3 after Warner Bros. cut tie with the embattled actor after a libel suit he filed in the U.K. was dismissed. He was snapped in Switzerland last month

In addition, the movie’s release has been has been delayed until July 15, 2022 amid ongoing changing circumstances in the theater industry amid the coronavirus pandemic, Deadline reported. It was previously slated to arrive in theaters November 12, 2021.

The studio’s decision to part ways with the Kentucky-born actor came after his libel trial against The U.K. Sun was dismissed (after the publication had called him a ‘wife beater’ amid his stormy split with actress Amber Heard).

Insiders told THR that the studio was hoping to let due process in the case lead to its decision to part ways with the actor, who’s also known for playing Edward Scissorhands as well as Jack Sparrow in the Pirates of the Caribbean series.

Depp had a special provision in his contract called pay-to-play, meaning that he would get his full salary no better what happened to the movie, regardless of if it was scratched, or if his role went to another actor. (Jude Law and Eddie Redmayne remain slated to appear in the movie.)

The studio told the crew last week that Depp would no longer play Gellert Grindelwald in the J.K. Rowling series

Doomed: Amber Heard and Depp were snapped in January of 2016 in LA, months before their split

According to the publication, Warner Bros. did not terminate Depp from his contract, but rather requested he step down.

Depp last week took to Instagram with a statement about his parting from the franchise, which has made more than $1.4 billion in international box office.

He said that ‘the allegations against [him] are false,’ as he remains in litigation with Heard in a defamation suit in Virginia

He that his ‘life and career will not be defined by this moment in time’ and that he was gracious to have a large fan base of supporters.

‘I’d like to thank everybody who has gifted me with their support and loyalty,’ he said. ‘I have been humbled and moved by your many messages of love and concern, particularly over the last few days.’

In a statement, Warner Bros. said, ‘We thank Johnny for his work on the films to date.’

NFL Rumors: J.J. Watt Will Likely Be Traded To A Contender After 2020 Season, Per ‘CBS Sports’

According to a new report from , there’s a very good chance Houston Texans defensive lineman J.J. Watt will be traded to a contending team once the 2020 season is over. As explained on Sunday morning by the outlet’s Jason La Canfora, Watt is now at a point in his career where he has dealt with “significant pain and injury.” He also noted that the veteran was among the Texans […]