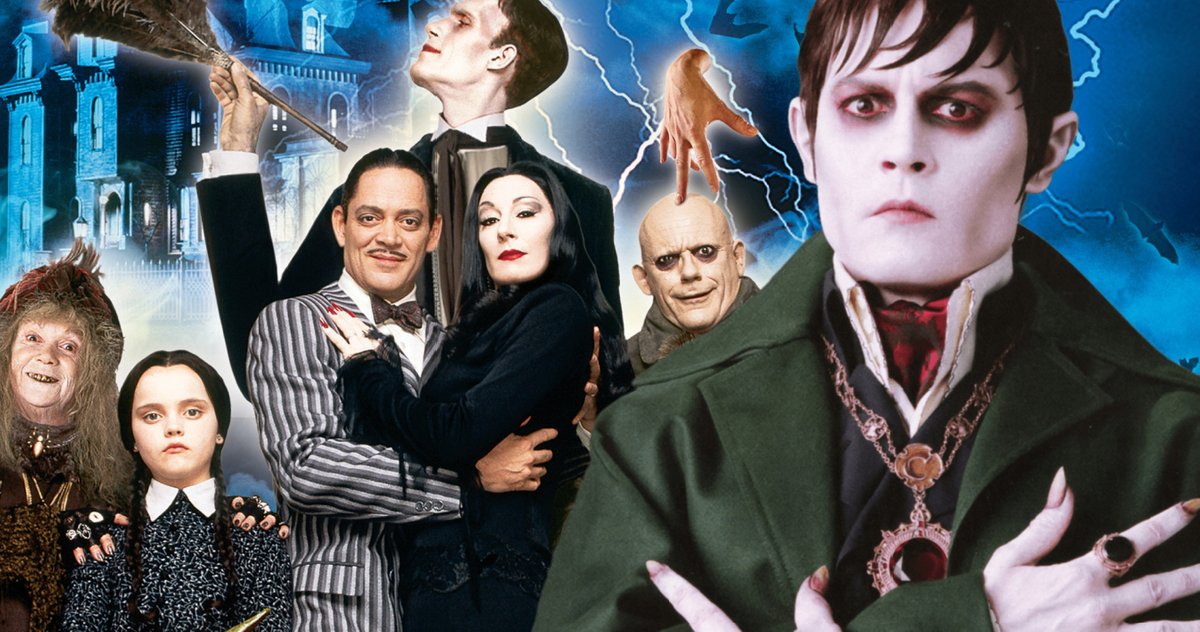 With Tim Burton developing a new take on The Addams Family for television, many fans are calling for Johnny Depp to play the new Gomez Addams. This week, word broke that Burton was working on an updated version of the classic television series that would put Wednesday and her kooky relatives into a more modern setting. Although the project is reportedly in the midst of a bidding war, it hasn’t yet officially begun production, and there’s no word yet on who might be featured in the reboot show’s cast.

Naturally, many Tim Burton fans were quick to suggest Depp to play Gomez. Considering how frequently the two have worked together in years past, this choice seems fairly obvious. From classic Burton hits like Edward Scissorhands and Ed Wood to Charlie and the Chocolate Factory and Alice in Wonderland, Depp has consistently been featured in the lead roles of the filmmaker’s projects. In fact, Depp has even already led a Burton reboot based on a classic horror-comedy TV series, starring in Burton’s Dark Shadows movie adaptation in 2012.

For the fans hoping to see Depp appear in The Addams Family, however, it comes down to much more than just a connection with Burton. On social media, fans are posting photos of Depp sporting a mustache while wearing a suit, and it’s not difficult to compare him to Gomez. Not only does he have the look, but through his many established roles in previous projects, Depp appears to have the charm necessary to pull off portraying such a beloved character. It’s certainly not going to be easy for any actor to follow John Astin and Raul Julia, who were both so iconic with their own portrayals, but Depp definitely has the potential.

“Johnny Depp is the only option for Gomez Addams in an Addams Family reboot. You can’t change my mind,” one fan writes on Twitter, adding a black-and-white GIF of Depp in a pin-striped suit. “If Johnny Depp doesn’t play Gomez in Tim [Burton’s] new addams family I will be so sad,” another echoes. A more emphatic tweet reads, “Tim Burton is bringing the Addams Family back to TV and I just cannot imagine anyone better for Gomez than Johnny Depp PLEASE PLEASE PLEASE HAPPEN.”

Other celebrity names are floating around on social media as good choices fans want to see star in Burton’s Addams Family series. Along with Depp, Oscar Isaac and Rami Malek have come up as other options for Gomez. Meanwhile, names like Eva Green, Winona Ryder, and Burton’s ex-wife Helena Bonham Carter have come up as casting suggestions for Morticia. Until the project actually gets a greenlight to move forward and the cast actually starts filling out, fans will likely continue to speculate over who might be great additions for the rebooted TV series.

While fans wait to see what comes next with Burton’s version of The Addams Family, the franchise will be moving forward either way with its animated iterations on the big screen. Following the success of last year’s animated movie, The Addams Family 2 will bring the family back for more come Halloween 2021.

Johnny Depp is the only option for Gomez Addams in an Addams Family reboot. You can’t change my mind. pic.twitter.com/WJWxNhxorQ

I can’t think of anyone better to be in charge of rebooting the Addams family tv series than Tim Burton, big hell yes! Also, can he cast Winona Ryder and Johnny Depp as Morticia and Gomez, please? https://t.co/qLY1F1dfNe

Since they are having an #AddamsFamily movie reboot, I have a few casting ideas:

JOHNNY DEPP FOR GOMEZ ADDAMS!! try to change my mind 😋

Okay, but why no one is talking about the idea of bringing Johnny Depp and Winona Ryder as Gomez and Morticia Addams? They would explode the project FOR SURE. pic.twitter.com/fNLvydQnzZ

#JohnnyDepp as Gomez Addams in #TimBurton’s Addams Family TV show would be more than perfect!!!🤞🤞🤞🤞 https://t.co/zst3pm1Cgh

A post shared by LeToya Luckett-Walker (@letoyaluckett) on Oct 27, 2020 at 12:28pm PDT Letoya and Tommicus welcomed their son on September 14th, 2020. Letoya took to her Instagram to announce the baby news. “Tyson Wolf Walker,” the singer captioned under a photo of the baby boy’s feet, revealing that he arrived at 4:03 a.m. and weighted 9 pounds and 7 ounces. “Overjoyed! Thank you Heavenly Father.” A post shared by Tommicus Walker (@tommicuswalker) on Oct 27, 2020 at 12:41pm […]