Prince Harry and Meghan Markle set the tone for their post-royal lives when they announced their multimillion-dollar production deal with Netflix. The Sussexes will be working with the streaming giant to produce documentaries, docuseries, feature films, scripted shows, and children’s programming.

The deal, said to be worth as much as $240 million, has allowed the couple to achieve their goal of financial independence from the royal family, but forming a production company wasn’t Harry and Meghan’s first choice for their post-royal career paths, apparently.

On their Royally Obsessed podcast, hosts and royal experts Roberta Fiorito and Rachel Bowie discussed the deal—and what the Sussexes originally planned to do after their royal exit.

“It must have felt kind of nice to put in writing and release that information that they haven’t been receiving any money,” Fiorito said, according to Express. “It confirms that they are doing this on their own and they planned for that and are going to be alright.”

“I didn’t expect it to be so so quickly. Six months later, they’re already wiping their hands of the Royal Family’s coffers,” Bowie added. “What struck me as most surprising is how quickly they were able to follow through their plans. They essentially said, ‘we laid out these plans, and it’s not going to be a year, we’re done’. They mean business.”

This is where Fiorito pointed out that the Netflix deal was actually Plan B for the Sussexes—and the role the Queen played in forcing them to scrap Plan A.

“They also had to pivot from their full plan. They were going to do SussexRoyal, but the Queen put a stop to that,” she explained. “They really had a different idea in their heads in January of how this would all go. So I’m curious how long the Netflix deal has been in discussions, but I feel like they have made things happen.”

It’s possible that Harry and Meghan’s experiences trying—and failing—to launch their SussexRoyal brand played a role in the way they rolled out news of their Netflix deal. According to a report from The Sun, the couple didn’t tell the Queen about the Netflix deal before the news was announced publicly, which means the royal family didn’t have a chance to weigh in on—or try to block—the move.

“Harry did not inform the Queen about the Netflix deal,” a royal source said. “Her Majesty is all too aware of the pitfalls of when senior royals embark on lucrative projects—Prince Edwards’ production flop and some of the deals Sarah Ferguson has signed over the years to name a few. Her view is simple, the Royals are not for sale and danger surrounds high profile roles outside of the institution itself. But knowing her grandson Harry as she does, the Queen will know there would have been little chance of talking Harry and Meghan out of it.”

Kayleigh Roberts Contributor Kayleigh Roberts is the weekend editor at Marie Claire, covering celebrity and entertainment news, from actual royals like Kate Middleton and Meghan Markle to Hollywood royalty, like Katie Holmes and Chrissy Teigen.
This content is created and maintained by a third party, and imported onto this page to help users provide their email addresses. You may be able to find more information about this and similar content at piano.io 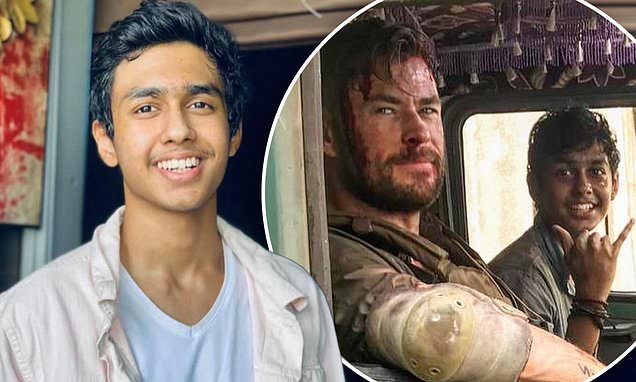 Indian actor Rudhraksh 'Rudi' Jaiswal has revealed how Chris Hemsworth changed his life after the pair starred in Netflix movie Extraction together. The 16-year-old was bullied at school but the Hollywood star, 37, became his mentor on set and has continued to give him advice. 'Before I did Extraction, my life was very different. I was bullied at school, people would try to bring me down and everyday I would go […]